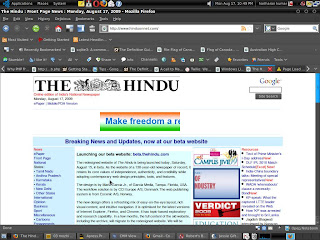 It has been a long time we are still making use of Internet explorer 6.(IE 6)
I was wondering how Internet Explorer people could make use of web2.0, enjoy the pleasure while surfing internet.
This made me come up with Internet Explorer 8 article(IE 8).
I will try to provide this article small and crisp as much as possible.
About - IE8 is the latest web browser developed by Microsoft and is going to be the default browser for the upcoming OS windows 7 and windows server 2008.
Focus - Security, ease of use,tabbed browsing and improvements in RSS,CSS,Ajax support were its primary focus.
Features -
Webslices - This is a tool that keeps users automatically updated with parts of web pages that they would like to see daily. Users need not check updates manually like news sites, the weather, stock quotes etc. If the links to these sites are included in the Favourites bar, users will be alerted about fresh information. Another thing to remember is Host should also provide this functionality for automatic updates in browser. Webslice is not like firefox Live Bookmarks and does not syndicate feed in a proper manner. Assume I have three comments in my blog and deleting the 2nd comment in my blog is not getting reflected in the webslice ie deletion of items sucks in webslice. eg-> microsoft,cricket,News updates,Twitter updates as shown in webslices image

Accelerator - This feature helps an user to perform browser-based tasks like searching,looking up addresses using a map service, sharing content on a social network etc with ease of use.Accelerators eliminate the need to copy and paste content between pages eg -> select TCS,Thoraipakkam, and accelerate it, you can see location of office in Google map, live map. as shown in accelerator image 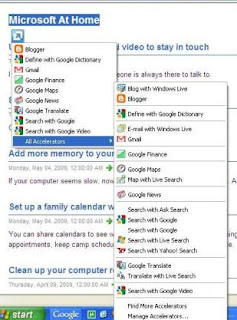 Note you might see many google options for acceleration in my image. I have installed google toolbar in my IE 8.
Suggested sites - This feature suggest relevant sites to the current sites, we have in our browser. When this feature is enabled, IE 8 asynchronously sends to browser information to the microsoft server over a secure connection. Recommended sites are not powerful and stumbleupon users have to be unhappy by this feature. 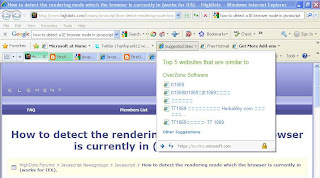 Address Bar - This features domain highlighting for added security so that the top-level domain is shown in black whereas the other parts of the URL are grayed out. Please see the address bar in image below weblsice.
Security - Browser has enhanced filters(smart screen) to help prevent the installation of malicious software and alert users to phishing attempts and sites that pose a security risk.
Privacy - It also has introduced the facility to browse web sites privately, without leaving track locally of the sites visited and other browser-based activity, and also to control the harnessing of information by third party sites to track user activity. 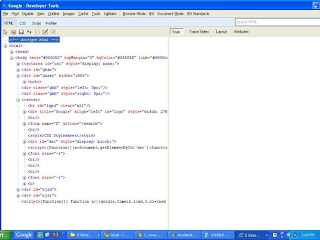 Speed - As for speed It starts quickly, loads pages fast and instantly gets you started on what you want to do next with a powerful new tab page.The part of the browser that processes web page scripting components works faster.
Memory - As for as memory it is greater than all. As we know chrome is the browser which consumes huge memory, but Google products always reveal diligence. My test results here eg - if you take a tab in IE 8 with http://www.google.com and as well as in chrome, IE 8 consumes around 37-43k where as chrome hardly takes 7-13k. They have created seperate process for each and every tab and process is freed in vain when a tab is closed. 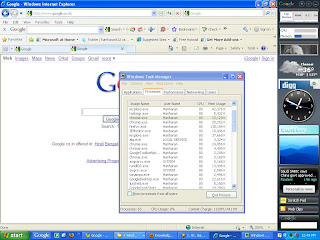 There are some interesting features in IE 8 and this is a boon to web2.0 site lovers from Microsoft.
If you are a IE user surf, with IE 8 and enjoy the benefits of Web2.0 with security as one primary thing and ignore IE 6 which is less secure,non scalable, memory leaks and helpless CSS engine
Firefox is my all time favorite and if you are looking speed you can go for Google chrome.
Posted by hariharan kumar at 9:18 PM No comments:

Prayer as an act is meaningless. If we pray with some expectations, it is better to remain silent. Because when attitude goes wrong, everything that works around is not right.

If our attitude is prayerfulness, worshiping everything in life, then the prayer is meaningful. Realizing Brahman in ourself and becoming prayerful is a prayer.

During prayers, we should have full awareness of who are we. Our Mind should sync with heart, from concentration(Ekagram only one thought) to Meditation(and becoming that itself). If this continues, we will realize we are the one pervading everywhere.

God cannot do/give anything for us,unless we do something. What He needs to give has given enough. It is up to us to make use of it.

God has many forms and of course created by us for our convenience. Realized souls say ‘know about yourself’. Lord Krishna says, ‘You are born because of your karma’ . So do we need to pray God to increase our karma? or to surrender ourself to our Atman and attain Nirvana??

Posted by hariharan kumar at 4:38 PM No comments: