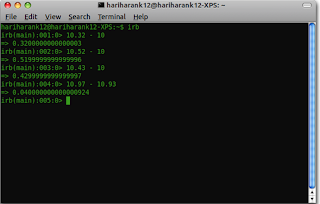 
Also it should be noted that round(n) as written in Float class in ruby, which rounds to 'n' decimal places doesn't work with Jruby. Any clue on this???
Posted by hariharan kumar at 7:36 PM 10 comments: